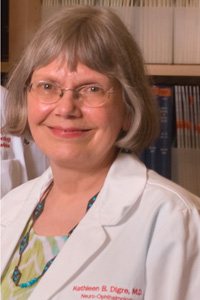 She also chaired the steering committee for an OWH funded project, UWIN (Utah Women's Health Information Network) and directed a project on screening for diabetic retinopathy using telemedicine. She is currently directing the grant, Coalition for a Healthier Community for Utah Women and Girls. She directs the Center of Excellence in Women's Health at the University of Utah.

Her research focuses on clinical disorders of the optic disc, increased intracranial pressure (pseudotumor cerebri) and anterior ischemic optic neuropathy. Her book, Practical Viewing of the Optic Disc was published in 2003. Further interests include the study of headache, photophobia, and neuro-ophthalmic disorders in pregnancy. She is the author of over one-hundred peer-reviewed articles, reviews and abstracts, and she lectures in the United States and Internationally.

Honors awarded to Dr. Digre include: Phi Beta Kappa, Alpha Omega Alpha, Hancher Finkbine Award, Heed Fellowship in Ophthalmology, Residents teaching award, and Fellowship award to the Hedwig van Ameringen Executive Leadership in Academic Medicine (ELAM). She received the 2004 Gender Equity Award for the University of Utah given by the American Medical Women's Association. Since 1994, she has been listed in “Best Doctors in America”. In 2008 she received both The Distinguished Service Award from the North American Neuro-ophthalmology Society and also the Linda K Amos Distinguished Service to Women Award from the University of Utah. In 2010 she received the Special Services to Libraries Award by the Utah Library Association. In 2012 she and her husband, Michael Varner received the Rosenblatt Award at the University of Utah.

She has two adult daughters. Her hobbies include reading and discussing books, running, skiing, fishing, opera, hiking, and traveling.